Book Review: The Goldilocks Enigma: Why Is The Universe Just Right For Life by Paul Davies 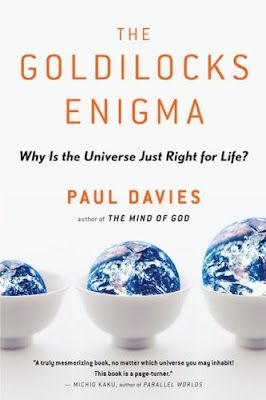 A book that took me out of the everyday claustrophobic routines and worries of life and shoot me into the infinite realm of the multiverse. A book to help you contemplate eternity; a life changing, even spiritual book. Yes I'm not exaggerating-it's that good. Paul Davies, popular science writer and physicist tackles the biggest question of them all. As it says on the tin, why is the universe just right for life? It seems that the laws of physics are 'fixed' at a minute level to allow for the existence of biology. 'If almost any of the basic features of the universe, from the properties of atoms to the distribution of the galaxies, were different, life would very probably be impossible.' From this underlining mystery of 'how come existence' or the Goldilocks Enigma, Paul Davies goes on to describe the scientific theories that have attempted to get a grip on it-he rejects religious explanations-God designed the universe-as a non-answer, but clearly explains why this is so and takes the more sophisticated theologians seriously. Along the way we also get a clearer picture of the latest ideas in cosmology and particle physics.

After we have had our heads caved in by some very complicated theories about the origins of the universe, it's structure and its future (quantum cosmology, string theory, eternal inflation, etc) we have some answers to the Goldilocks Enigma set out for us. The most disorientating is that we live in a pocket or bubble universe which is only one amongst an infinite collection of pocket universes-the multiverse. This is why although the odds are completely against it we find ourselves in a universe with all the right parameters for life. There are an infinite amount of universes' without these conditions but of course we self-evidently find ourselves in a universe that does support life-in other words we are winners of a cosmic lottery. The philosophical implications of a multiverse are also analysed by Paul Davies; do we live in a fake universe, a computer simulation for instance? Or 'could it be that everything exists!'

But the author supports another theory which is finally revealed at the end of the book. It's beautifully optimistic, a positive and life-enhancing idea closer to philosophy then strict science, but still based on a scientific world view-an observer, participatory universe involving an evolution of information processing (a scientific definition of mind, that does not exclude emotion, feeling and creativity) to a limitless extent in the far, far future and loops in time. Here Humanity, Mind and Consciousness are central, bringing the universe in which we live into existence.
Posted by George Matthews at 02:07